Location of the North Fire Station
Probably 1 of the most often asked questions regarding the North Fire Station is due to its location. “Why,” we are asked, “is this fire station so close to the other one?” To answer that question properly, we have to start from a historical perspective, a few hundred years ago.

During the 18th and 19th centuries, there were several privately-owned barns or garages in Amherst which were known locally as “fire houses.” The building owners sometimes donated space to house fire apparatus, but in other cases, they were paid a rent by the town.
We know that there was once a volunteer “East Amherst” fire company located somewhere near the common in front of what is now Fort River Elementary School on South East Street. There was also a company in South Amherst and another somewhere in “Mill Valley.” For many years, too, before the end of the 1800s, there was a company in North Amherst.
About 1904, a single bay, wooden station house was constructed for the North Amherst fire company on Pine Street. It was once the home of Amherst Hose Co. #3, formed in North Amherst in August of 1901, with original members Charles Haskins, Frank N. Dickinson, Edwin H. Dickinson, Frank Hobart, George Hawthorne, Edward Puffer, T. Whalen and E. B. Hobart. So, in fact, there has been a fire station in northern Amherst for over a hundred years.

Restoration
The building served as a fire station through the 1960s, eventually being allowed to deteriorate as a storage building for the Department of Public Works. The building had no central heat or water. On February 19, 2002, the 625 square foot building (on a 795 square foot plot) was purchased from the town of Amherst by Christopher A. Tarr. By agreement, the outward appearance of the building cannot be altered but it can be restored, which is the owner’s intention. 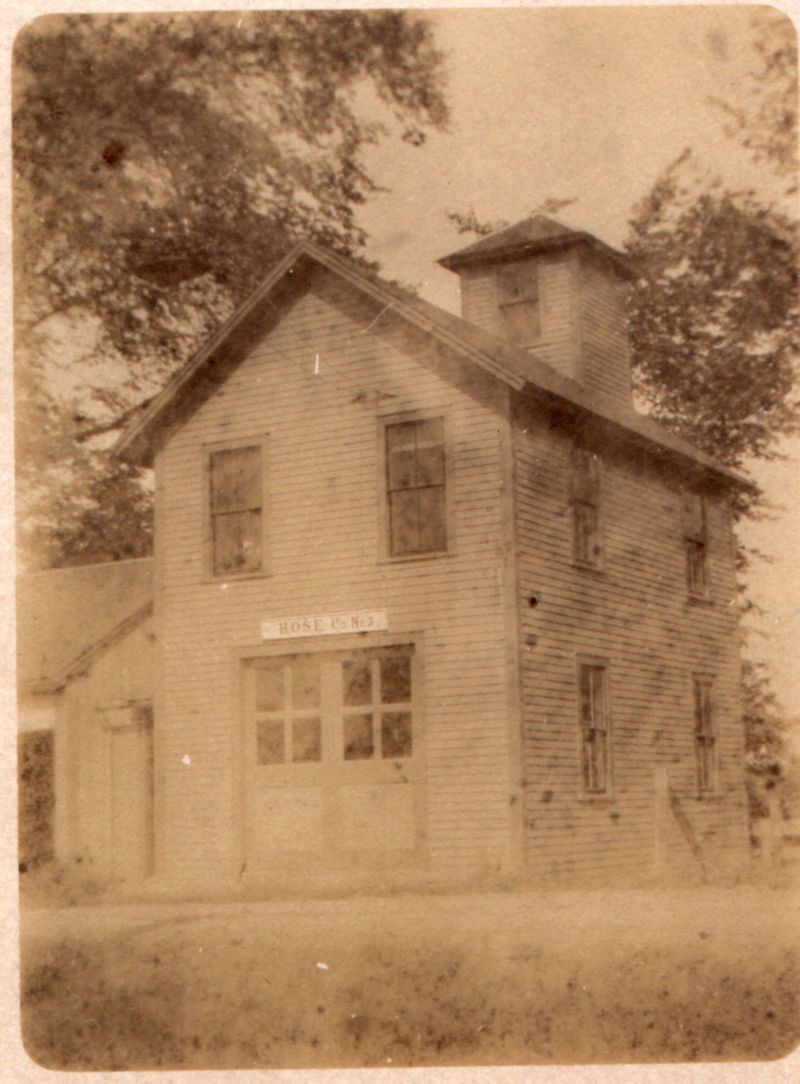 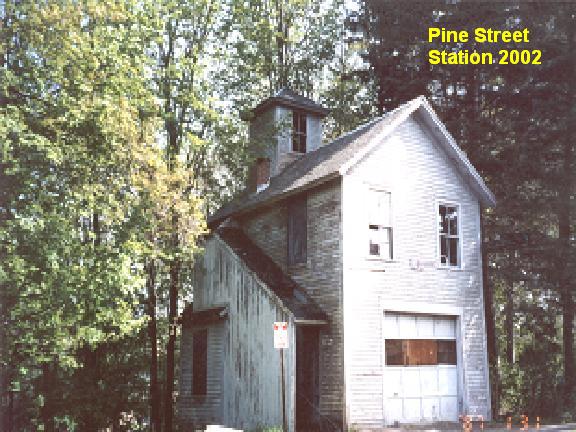 Throughout the 1940s and 1950s, vehicle traffic increased in a north-south direction through the town. Additionally, emergency calls to the University of Massachusetts were steadily increasing as the campus population grew. Fire Chief George A. Cavanaugh recognized the developing need for better emergency coverage to the north and he proposed a 2nd, full-scale fire station. Unfortunately, the town needed quite a while to consider the matter. Chief Cavanaugh died in office in 1965 without a station approved.
Northeast Bypass
On a totally different front, during the late 1960s, there was a movement afoot in to design a “northeast bypass.” The idea was to create a road that would allow vehicle traffic along Route 9 (to the east) to circumvent center, linking to Route 116 to the north. And although many agreed such a road would be an asset (ideally curtailing the burgeoning congestion in the center of town), the mechanics of its construction was the subject of extended debate. By the early 1970s, a decision could no longer be delayed for the construction of a fire station to the north. The often-fervent discussions regarding the location of a bypass roadway were seriously considered in the final selection of a site. Chief John T. Doherty made the following report in 1973:


"The Annual Meeting of 1973 authorized funds for an additional station and vehicles to be placed in the northern section of town on property furnished by the University. A 5 -member North Fire Station Building Committee was named, Architect Donald Williams of retained after a thorough selection procedure, a 3.8 acre site on negotiated with the University and a gift transfer was approved by the Legislature. Following much detailed work covering some twenty meetings with the Committee Architect Williams completed final plans and specifications for bidding in early July, 1974…”

Building Construction
Construction on the building did in fact begin in 1974 and work continued for over a year. Chief Doherty had this to say in his Annual Report of 1976:


“The new North Fire Station located on East Pleasant Street at Eastman Lane was completed and placed into operation on December 5, 1975. This building is presently proving out the efficiency of the unusual and attractive design. Constructed at a cost of approximately $750,000, the specifications were found to be so complete that only negligible contingency costs were encountered, and it was possible for town Meeting to transfer $15,000 from the building appropriation to the partial payment of our new 1976 pumper. The department expresses our appreciation of the diligent and successful work of a fine building committee: William Lambert, Merle Howes, Edith Wilkinson, Frank Bukoski, Joel Winslow, and Alan Torrey; and to our architect, Donald F. Williams.”


But as to the subject of location…so much can change in just a few short years! In this report, Chief Doherty went on to remark:

North Fire Station Today
Today, North Fire Station still looks, in many ways, ahead of its time, a credit to its designers. Visitors over the years have often remarked that the over 30-year old station “must be brand new.” The gray, concrete and steel building is heated and cooled by LNG (natural gas). To the front of the building is a large glass-enclosed office that was originally intended to be a dispatch center, known to Fire Department personnel as “the fishbowl.” On the 1st floor are several offices, 2 restrooms, a meeting room and a number of storage areas. The garage area has 3 “drive-through” bays (with 14 foot doors) and a single, smaller bay. The garage area includes a workshop, several storage areas and a “cascade area” where air bottles are filled. The building has no basement. 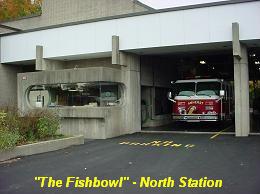 “We were greatly disappointed by the decision of the Town Meeting to reject the Northeast By-Pass Road, which action reduces the effectiveness of the new station site for response routes.  Selection of the building site from amongst other University property was greatly influenced by the proximity to the proposed road.  In a wry mood one could note that our major new facility is located on a deadend street surrounded by poultry and horses instead of being located on a major arterial intersection…"

“We were greatly disappointed by the decision of the town Meeting to reject the Northeast By-Pass Road, which action reduces the effectiveness of the new station site for response routes. Selection of the building site from amongst other University property was greatly influenced by the proximity to the proposed road. In a wry mood 1 could note that our major new facility is located on a deadend street surrounded by poultry and horses instead of being located on a major arterial intersection…”

Design Features
One of the important design features of the North Fire Station from the very beginning was allowance for students on the Student Force to live in the station house. A majority of the 2nd floor of the building is devoted to four 2-person bedrooms, an open living space, a dining area, a study / meeting space, a full kitchen and restroom facilities (with showers) for the students. It was not until the 1990s that female students finally began living in the station; it was then that additional restroom facilities were constructed on the 2nd floor. In 2002, new carpeting was installed and several 1st floor areas were tiled.

Insufficient Building Size
Despite the size of the building, the quarters are no longer sufficient. Instead of the original 8 to16 students on the Student Force, there are now upwards of 40, most of them living on campus each semester. The 4 on-duty permanent force members who man the station each night are housed in a single dormitory-style combination bedroom/locker room. Due to lack of garage space, a number of service vehicles must be stored outside throughout the year.
[]