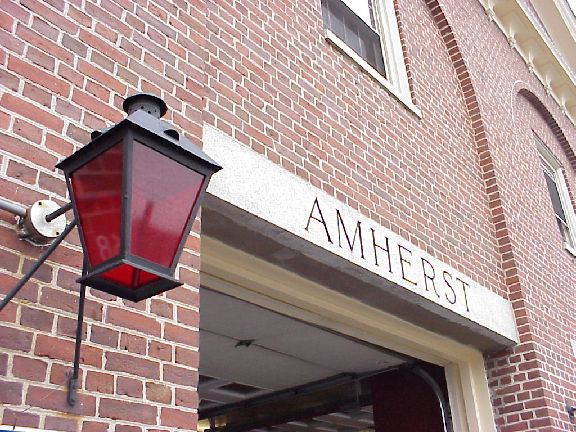 The Beginning of the Central Fire Station
The first central fire station was built in 1845 on what was then Pleasant Street. [Today, on the same site, 24 North Pleasant Street, is the Amherst Brewing Company.] On the south side of the station house was a livery stable; to the north, a blacksmith shop, and later Kiely’s garage. The building was a single story wood frame, with a 2-story brick addition to the rear which housed the lockup for the police department. There appears to have been room to house only a hand pumper and a “hook and ladder” truck. By 1896, the Fire Department Board of Engineers was eager for additional space. In its report to the town for February 1, 1896, the Board remarked:
“For the engine house at the center the engineers recommend the appropriation of the sum of $1200 for the enlargement and repairing of same, the house being badly out of order and of not sufficient length and improperly constructed for the proper placing of the apparatus, it will be greatly benefited by the repairs and enlargement which the engineers recommend.”
The money was duly voted and the Engineers gave this report the following year:

“...At the last March meeting the town appropriated the sum of $1200, for enlarging the old engine house and making it more commodious for the firemen and the apparatus with which they are equipped. The old building was, by the addition made, brought forward to the line with the street and graded to the sidewalk. The enlargement of the old building, by an addition to its front and a story above, now affords 4 new rooms, and a bath-room with 1 large room below for the hose wagon and hook and ladder truck. The upper rooms are occupied by 2 members of the fire department who have the care of the building, and are always on hand ready for immediate action in case of an alarm of fire. This arrangement affords a sense of security which no other could possibly do.” 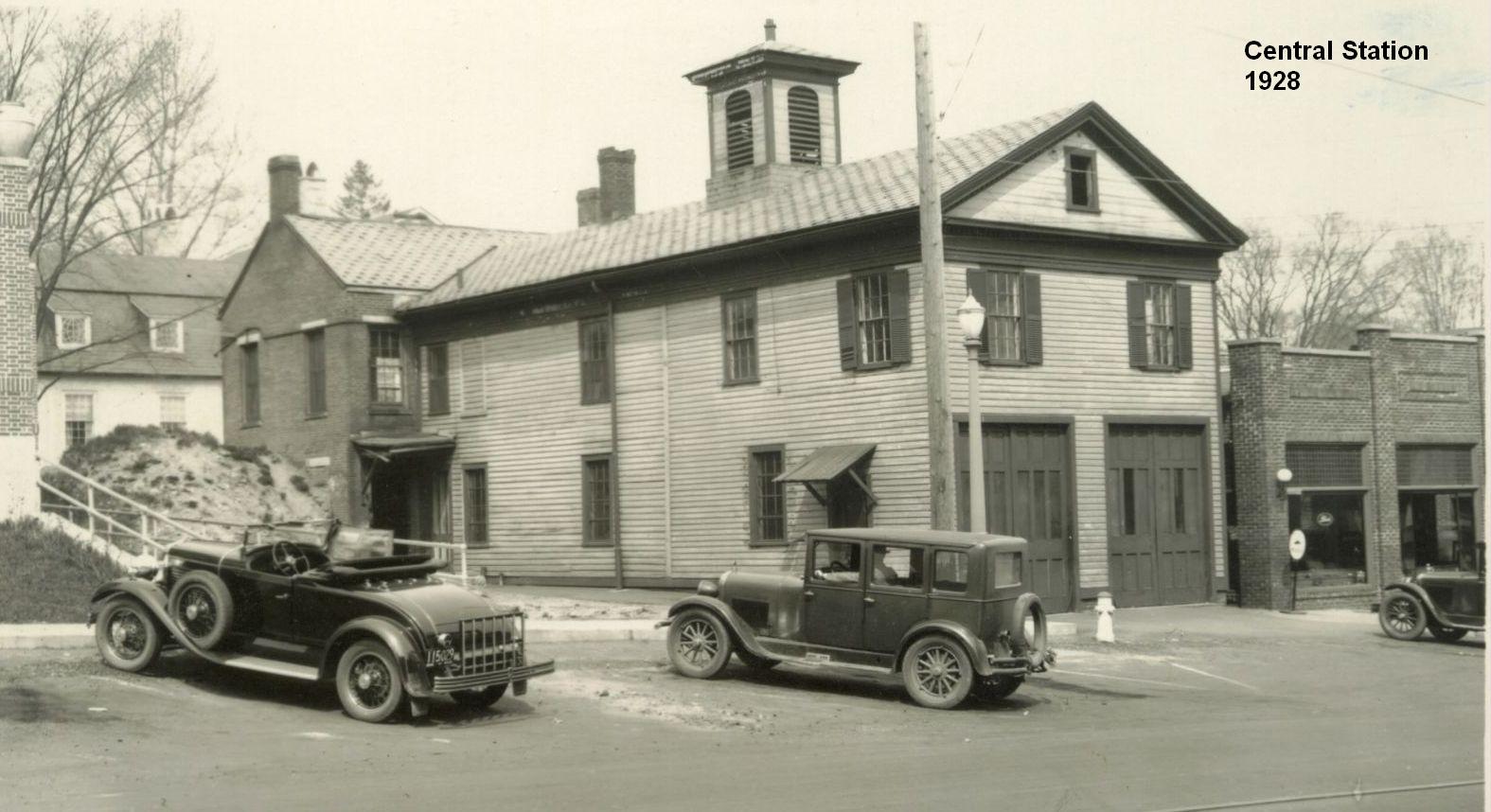 We can also see by this report that ‘firemen’ were now able to live in the fire station, an arrangement which began the “permanent” firefighting force. In fact, in the 1898 annual report, the Board of Engineers refers to these men as “permanent.”

Chief Melrose Paige
By 1928, call fire chief Melrose Paige had led the Amherst Fire Department for 17 years; he was also the Chairman of the Board of Selectmen. Paige was in charge for a series of major fires right in the center of town over the previous 3 years: the Amherst House on December 9, 1926; the former Gunn’s Hotel on April 27, 1927; and the old Nash Block on Phoenix Row on February 27, 1928. Although there was no public criticism of the handling of these fires, it must have been clear to him that Amherst needed the services of a full-time fire chief.

Being both a Selectman and a fire chief, Paige was in a pivotal position to realize that the town needed a professional, a man who had been trained in a career department, a man with vision and an ability to lead.

Thomas E. Martin
Paige himself led the search for such a man. He named 1 Thomas E. Martin, a fireman for the City of Springfield, to this position on June 1, 1928. Martin was about 34 years old. 1 of his first jobs was to begin plans for a new Central Fire Station.
Construction of the New Fire Station
Given the long history in Amherst of spectacular downtown block fires, for quick response the new station could not be far removed from the 1 it was replacing. The Selectmen chose to move just a little north on Pleasant Street for the new site. They purchased the old homestead of the Whipple family, just north of Kiely’s garage, and demolished it. [A leaded glass window from the upper story of the building was set aside and used later in the addition and renovation of the Jones Library in the 1990s.] The new Central Fire Station construction began in 1929, under the direction of local contractor George Allen and Selectman Paige. However, on July 29, 1929, Chief Martin died in office of leukemia. He never saw the new station completed.
Herbert R. Ferris
As the next chief, the Selectmen chose fireman Herbert R. Ferris, also of the Springfield Fire Department. Ferris had previously been a fireman for the Easthampton Fire Department. Chief Ferris completed the construction of Central Fire Station, moving into the building on January 9, 1930; the project had cost $45,000. The 85-year old former fire station was demolished that same year. Chief Ferris remained less than 2 years before moving on to Greenfield, MA to become their fire chief. Greenfield was also looking to construct a new fire station and he wanted to be a part of that project. 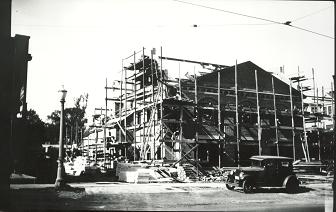 Today's Central Fire Station
The 72-year old Central Fire Station of today has undergone a number of additions and renovations, most of which are not well documented. Contrary to belief, horses were never housed in the station; by the 1930s, the Department was using motorized fire apparatus. At 1 time, the building was heated by coal and is now heated by oil. 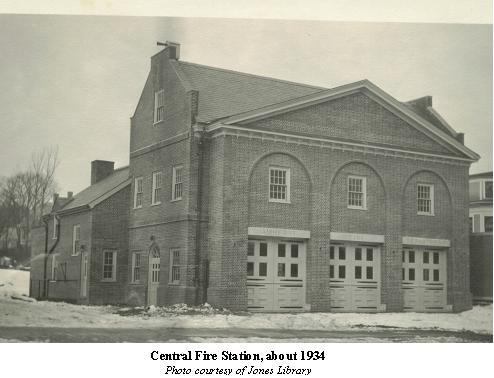 A 1-story addition to the rear of the building, originally added as garage space, has since been turned into offices and storage space. At least 3 different rooms in the station were once used as the Dispatch Center, where emergency calls by phone and street call box were received. This responsibility was assigned to civilian dispatchers in the 1970s. [The Amherst Communication Center is now located on the third floor of the Amherst Police Station at 111 Main Street.] In the early 1970s, twin fire poles that led from the upstairs locker room to the apparatus floor were removed as a safety concern. The 3 10-foot bay doors have been replaced several times and are opened today by electric door openers. Energy efficient windows finally replaced the leaking wood sash frames in the early 1990s.
The Fire Bell
At some point, a large fire bell was placed outside on the front corner of the building as a display. The 562-pound bell had at 1 time sounded the alarm from the cupola of the old Central Station. It was placed into service in June of 1888, having been purchased by Chief Engineer William Henry Harrison Morgan at a cost of $136.19. A Civil Defense siren of World War II vintage still sits atop the station, now all but abandoned. Longtime town residents may remember the days of their youth when a fire horn would sound out a 3-digit code of blasts to announce the street location of a fire alarm coming in by street box. Many a wide-eyed child would run to the kitchen cabinet where the family kept the list of fire codes published each year by the local newspaper. If he or she was lucky, the family might even bundle up to visit the scene of the conflagration and watch their fire department in action. 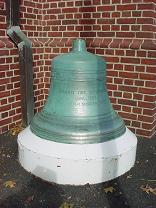 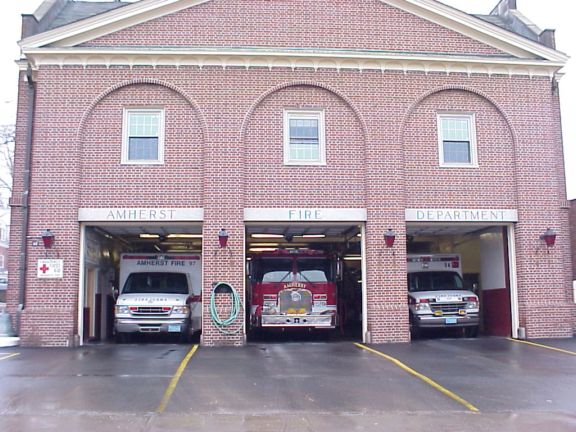 Building a New Station
Central Station is now far too small to house the many vehicles and personnel assigned to it. There are only a few inches on either side of the engines and ambulances to clear the bay doors as the vehicles are backed in many times each day. The gasoline fumes from some vehicles cannot be properly vented. Major renovations would be necessary to make the building accessible to all members of the public. For these reasons and others, the Town has begun to plan for a new station, 1 better equipped to house the emergency personnel and vehicles of present day. Unlike its predecessor, we hope the building will not be torn down but will continue to serve the town in some fashion in the coming years.
[]